Neuralink: The Science and Technology

Uncovering the science and technological advances that lie under the Neuralink hype
Sep 8, 2020 • 6 min read

Neuralink’s Summer Update live stream on August 28, took the entire world of science and technology by storm. As per the usual, there was a lot of hype surrounding the company with Elon Musk being the CEO of Neuralink. All the hype aside, the live stream was the first detailed look the world got in regards to what Neuralink had been working for the last 4 years.

Let’s get one thing straight - Neuralink is NOT the first company to develop a brain-computer interface (BCI) or brain-machine interface (BMI). While Neuralink may be the most hyped, the fundamental technology and science that Neuralink builds upon has been around for many decades.

The important thing to understand about our brain is that it is made of tens of billions of neurons that send and receive signals from other neurons. The neuron is the primary unit of the nervous system (that includes the brain). Each neuron fires an electrical signal to another neuron through synapse which are junctions between two nerve cells. These electrical signals can be measured similar to how we can Specific neurons and specific parts of the brain usually carry information regarding different types of activity in the real world. So, in theory, any sort of action or thought can be traced back to the firing of certain neurons.

A technique known as EEG (Electroencephalography for the nerds) is used to measure the firing of these neurons. EEGs have been used for nearly 80 years and this approach of measuring neural activity is not new by any means. It is also important to note that this method is non-invasive meaning that EEG electrodes are attached to your head ina mesh-like pattern to measure neural activity in different parts of the brain.

The output of these electrodes are waves that spike when many neurons in one part of the brain are fired in a small amount of time. Different frequency bands/ranges are used to differentiate different types of neural activity.

While the technique of EEG is still very commonly used today, there is one major downside - the accuracy suffers due to the distance between the electrodes and the neurons in the brain due to the skull. Usually, one electrode covers an area of about 2 sq mm and thus receives signals from millions of neurons. This results in the data from each electron having a low resolution making it impossible to track the signals from a single neuron or a small group of neurons.

To provide a more direct method of measuring neural activity, ECoG (Electrocorticography) is used. ECoG requires the insertion of electrodes under the scalp and thus requires surgery. In return, the signals captured from the ECoG have a higher temporal and spatial resolution. This means that the measurements can be taken much more rapidly resulting in minimal latency and the measurements taken can be pinpointed to a much smaller number of neurons compared an EEG to fMRI leading to a more detailed understanding of the brain.

In addition, since the electrodes in ECoG have the potential of extending into deeper regions of the brain, they can also measure neural activity in lower/deeper parts of the brain like the hippocampus where memories are made and stored.

Neuralink’s Link V0.9 (the chip that was shown in the live stream) leverages ECoG technology as it requires the electrodes to be inserted under the scalp requiring a surgery where a portion of the skull is cut open. 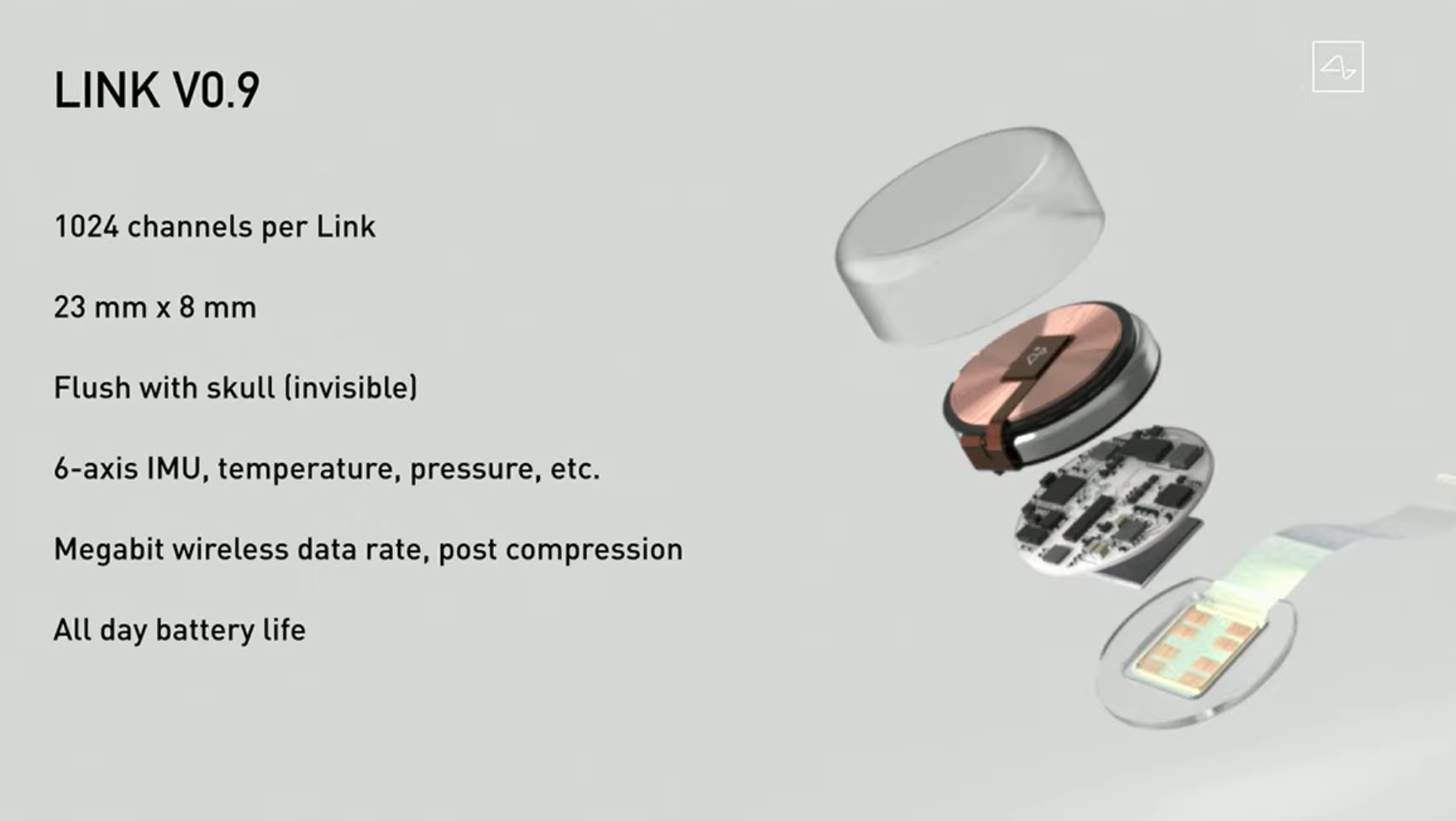 Overview of the device

Neuralink vs the rest

The most exciting technological advancements that Neuralink has made can be split into in five areas:

One of the most standout aspects of Neuralink is not the BCI chip itself but rather the automated surgery robot. The main improvements of using the robot would be that the robot would be less error-prone when compared to a neurosurgeon and the scalability of automating the process of installing the Link (product name of the brain chip).

The device itself is shaped and sized like a coin with a radius of 23 mm and a width of 8 mm. This is by far, one of the most company BCI devices as its slim design allows it to be flush with the skull making it hard to easily spot the device on someone’s scalp (assuming they are not bald of course). The charging method is also very convenient compared to devices that exist today as it uses an induction-based charging method similar to what you would use to charge a smartwatch.

Neuralink aims to provide spatial data that is orders of magnitude better than what is available today as it has already been able to achieve 1024 channels compared to ~100 channels found in devices that are available today. This would mean that the data collected by the Link could be used to measure signals from a much smaller group of neurons resulting in a deeper understanding of the brain.

Elon said that the Link would cost about a couple thousand dollars to get including the installation process. This is significantly cheaper than what exists today as it costs tens of thousands of dollars to buy and insert the device that exists at the moment.

Currently, BCIs have been proven to be useful (with varying levels of success) for treating several conditions, including both neurological and psychological disorders. BCIs have already been used for “providing assistive technologies for people with severe motor disabilities, particularly locked-in syndrome (LIS).” [1]. It has also been used for controlling seizures among epilepsy patients.

In fact, in the live stream, Musk says that the purpose of Neuralink is to “solve important brain and spine problems seamlessly implanted device.” The neurosurgeon at Neuralink also shared that they are currently targeting paraplegia and tetraplegia, which are motor and sensory impairments. When thinking of Neuralink in the light of solving neurological problems, most would agree that this is a great idea.

Where things start to derail for many is when Neuralink describes itself as “a neural engineering company developing high bandwidth brain-machine interfaces” as per the company’s website. Elon has openly stated that the end goal of Neuralink is to help humans keep pace with advanced artificial intelligence.

Putting the neural engineering and merging with AI conversation aside, it is undeniable that Neuralink has made many impressive advances in the field of BCIs in the few short years it has been running and is continuing to push the envelope for what can be achieved. However, it also raises many existential questions and ideas that I believe are important to explore.